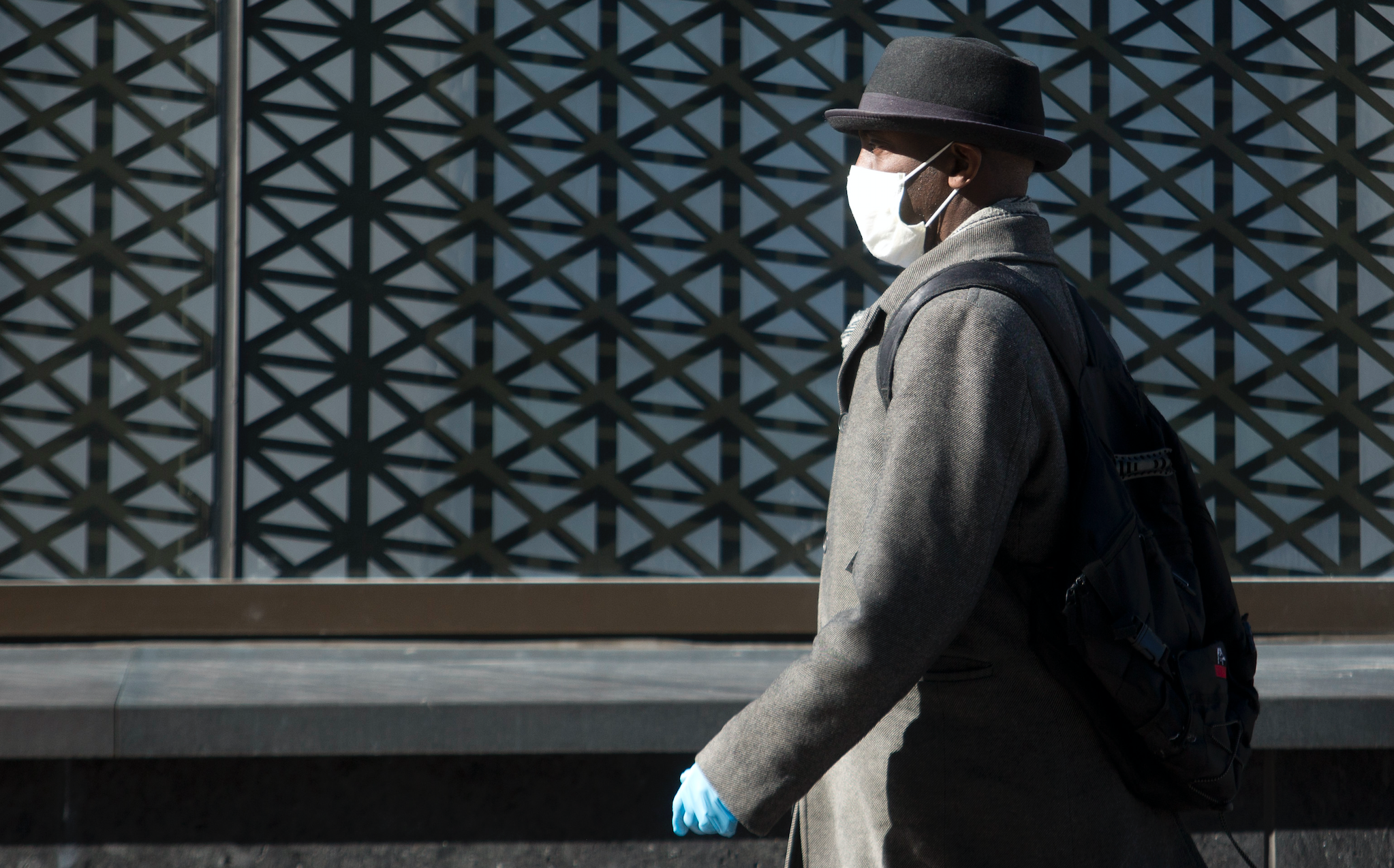 A man wearing a protective mask walks past the Bank of Canada Museum in Ottawa on Mar. 27, 2020./ Photo by Andrew Meade.

Several of Canada’s cities and provinces, as well as the federal government, are in discussions about launching apps that would use location data to track exposure to COVID-19, researchers behind two projects say.

Various teams around the world have been working on developing apps to trace the potential spread of the virus — from the Massachusetts Institute of Technology (MIT) and the University of Oxford to Canadian research centres and independent app developers. Some governments, such as Ireland earlier this week, have already moved to implement them in response to the ongoing pandemic.

In Canada, separate projects are underway that would combine phone location data with positive COVID-19 diagnoses to notify individuals about potential exposure in what their creators say are privacy-friendly ways. Such apps would rely on data from health agencies and need the approval of authorities to be available in app stores.

Valérie Pisano, president and CEO of research centre MILA, created by the University of Montréal and McGill University, said the centre is working on an app that individuals would choose to download to their phones.

“That technology would allow the phone to record with whom you’re in contact as you go about your daily life,” such as going to the grocery store, dropping something off for a friend’s house or taking care of relatives, she outlined in a phone interview. “As you’re doing that, you’re at different degrees of contact with other individuals.”

She said the first goal of the app is to “make sure that when someone is positively diagnosed, the other individuals, whether they’re known or unknown, who’ve been in contact with that person, get a signal and know they’re at risk.”

Pisano said the way that contact tracing is currently done is by an “arduous” manual process in which a health care worker asks the diagnosed person to remember whom they’ve been in contact with — which relies on people’s memories and excludes individuals they don’t know but have been nearby.

The app would “record relationships between phones. It wouldn’t know that you and I as individuals, as… people with a name or an address were in contact, but it would know that our two phones spent a couple of minutes together at a certain point in time, and so if one of us gets a positive diagnostic, there would be a way to push that information.”

The goal is to notify people who have been in contact with someone who tests positive as soon as possible, and to give them information about what they should do next. Pisano noted the GPS location information would not be shared with health authorities, and individuals would be able to choose whether or not their diagnosis is shared through the app.

Pisano said the team has been talking to various levels of government about this project, including the Montreal mayor’s office, the Quebec government and the federal government.

“There’s a really sincere interest, all the right questions are being asked here, and I think everyone has an appetite to mobilize around technologies that would be rooted in our Canadian values and help us mitigate this crisis,” she said.

At the federal level, MILA has been in talks with Innovation, Science and Economic Development Canada, Health Canada, the Department of Justice and the Office of the Privacy Commissioner.

Officials from Quebec and Health Canada did not respond to requests for comment by deadline Tuesday. Innovation Canada spokesperson Geneviève Sicard said in an email: “Over the past two weeks, the Government of Canada has worked diligently to mobilize Canada’s industrial manufacturing and research communities to fight COVID-19. All sectors of the economy, including data and digital technology, have a role to play to flatten the curve and support Canada’s economy. That is why we put out a call to manufacturers and the academic community to assist in combatting this pandemic. We will continue to review the many submissions and will provide updates as this work evolves.”

City of Montreal spokesperson Gonzalo Nunez said in an email: “In general, the City is in contact with many stakeholders and actors in the community of the artificial intelligence community, including MILA. In addition, MILA has been in contact with the City to discuss the proposed application and the conversation is ongoing. In all of its actions, the City follows the recommendations issued by the Regional Public Health Department. Such an initiative would be defined in conjunction with and according to public health needs.”

On March 24, Prime Minister Justin Trudeau said Canada wasn’t currently looking at using location data to track COVID-19, but wouldn’t rule out doing so in the future; the province of Quebec also said it wasn’t something it was looking at at the moment, but couldn’t say if it would do so in the future.

Office of the Privacy Commissioner spokesperson Valerie Lawton confirmed in an email that the OPC has been in discussions with the developers at MILA.

“During a public health crisis, privacy laws and other protections still apply, but they are not a barrier to appropriate information sharing. When reasonably and contextually interpreted, existing privacy legislation, norms and best practices for data collection, use and disclosure ensure responsible data use and sharing that supports public health. They also promote continued trust in our health system and in government generally,” Lawton said.

The MILA project isn’t the only one in development. Quebec engineer Jean-Philippe Monfet is working on a similar app that would use GPS to track locations where the phone travelled. It would use a PIN number that matches a case ID used by health agencies to share that information with a central, secure database that keeps track of individuals who are infected. “The app will compare the areas of potential propagation of the virus with your own location in your phone,” he said in a phone interview. If there is a match, people can be notified through the app, or that information is shared with the health agencies who then contact the individual who has been exposed.

Monfet said he has been in contact with the government of Alberta and the City of Ottawa.

“The City of Ottawa confirmed to us that they’re interested and more so, that the province of Ontario has funding and is also interested in this kind of application,” he said.

Tom McMillan, a spokesperson for the Alberta government said in an email that it is not “commenting on any specific device, technology or developer” but that it is “considering any and all approaches that can help limit the spread of COVID-19 and protect Albertans. This includes exploring a wide variety of technologies to see if they can help support social distancing, identify potential spread or otherwise improve the health of the public, while appropriately respecting and protecting individual privacy.”

If the province decides to move forward with a specific project, “we will, of course, announce this publicly.”

A spokesperson for the City of Ottawa said in an email the city “is exploring a number of digital solutions to assist with the global COVID-19 response.  At this point, we are only exploring solutions and have made no decisions on one particular solution.” Ontario’s health ministry did not respond by deadline.

Monfet crowd-funded start-up funds for the project, and the developers and other individuals working on the app are working on it without being paid.

Pisano said countries around the world are looking into such technology, with Singapore being the first to do so and researchers sharing open source information.

“Everyone is kind of sharing their technology and their code and how they’re thinking about it. So we’re talking to researchers at MIT, at Stanford, we’re going to be connecting with the Singapore team this week,” she said.

But she cautioned the MILA app would be tailored to Canada, including the country’s privacy legislation. Pisano said MILA has a “team that is working 24/7, basically, on all the privacy and data protection questions that this raises. We’re talking directly with top leaders in Canada and Quebec about this.”

She said the information would be encrypted, not tied to an individual, and “would be shared on servers in a way that it would be very difficult to extract data that could be used to do harm.” Pisano said the team behind the project does not want the technology to be used to track an individual’s movements. “I think neither the authorities nor the Canadian public would be open to a technology like that.”

Any use of personally identifiable information to track COVID-19 would need lawful authorization through the courts or an order made under emergency legislation, while using de-identified data wouldn’t raise privacy concerns, experts told The Wire Report.

Pisano said the first version of the MILA app would be focused on gathering information about phones that are in proximity to one another and connect to health system information so that people who have been exposed receive notifications. Later on, the app would help users make good decisions, such as telling them where to go to get tested, or to avoid crowded areas.

She said the team wants to see the app rolled out in the “next few weeks.”

While it believes the CRTC's existing definition of "customer confidential information" is broad enough to protect the use of the IP addresses and phone numbers of those using the federal COVID-19...

In its long-awaited privacy review of ABTraceTogether, Alberta's COVID-19 contact tracing app, the provincial privacy watchdog has recommended that Alberta Health update its description of the app in...

Prime Minister Justin Trudeau said Thursday that in developing the federal government's new voluntary app to trace exposure to the COVID-19 virus, it consulted the Office of The Privacy Commissioner,...