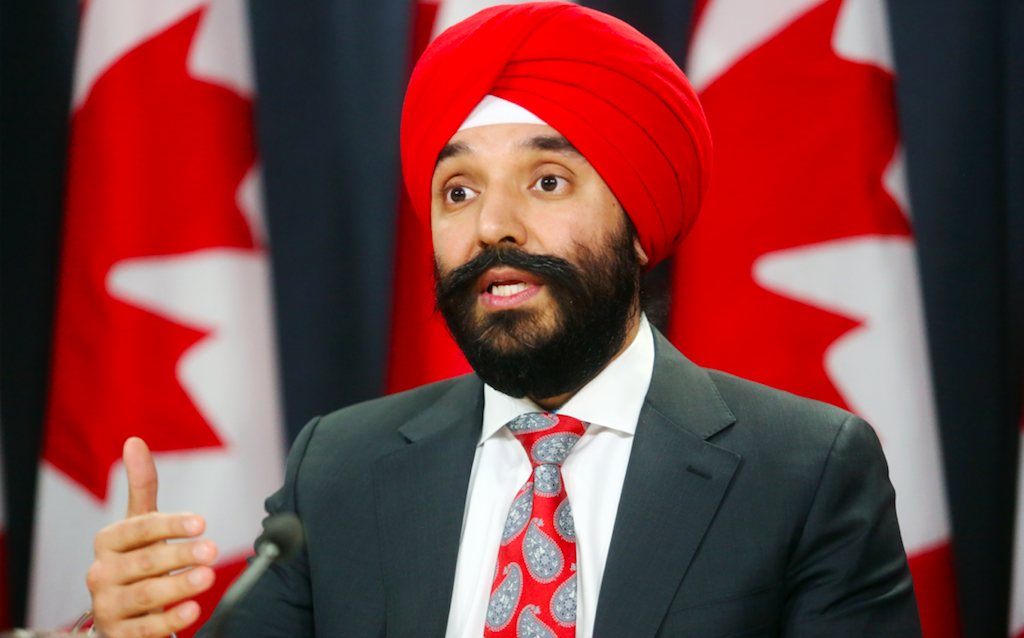 Innovation Minister Navdeep Bains at an announcement in December 2017./ Photo by Andrew Meade.

The Liberal government has sided with Canada’s largest telecoms in their appeal of an August 2019 CRTC decision lowering wholesale rates, saying those rates may harm network investment, though it did not overturn the decision or send it back to the CRTC for reconsideration.

“On the basis of its review, the Governor in Council considers that the rates do not, in all instances, appropriately balance the policy objectives of the wholesale services framework and is concerned that these rates may undermine investment in high-quality networks, particularly in rural and remote areas,” a statement from Innovation Minister Navdeep Bains released Saturday morning says.

“Retroactive payments to affected wholesale clients are appropriate in principle and can foster cooperation in regulatory proceedings. However, these payments, which reflect the rates, must be balanced so as not to stifle network investments.”

The CRTC issued the contested decision in August 2019, lowering capacity rates five per cent to 43 per cent, and dropping access rates three per cent to to 77 per cent. The incumbent providers stood to owe roughly $350 million in retroactive payments to smaller, wholesale-based providers as part of the decision.

The decision was praised by those small ISPs that buy wholesale service from incumbents, who called the rates “fair” and “reasonable.”

But the incumbents moved to fight the decision through every avenue available to them.

Telus Corp., BCE Inc. and the country’s major cable companies filed three separate appeals asking cabinet to reverse the decision, in addition to challenging the decision in front of the Federal Court of Appeal and at the CRTC.

Parties are currently awaiting a decision after the court heard arguments in the case in June, while the CRTC is weighing a review-and-vary application on the decision, which was merged after the incumbents filed three separate review-and-applications.

In the statement, the government said that given “the CRTC is already reviewing its decision, it is unnecessary to refer the decision back to the CRTC for reconsideration at this time.”

The companies argued that the rates were so low that they would harm investment, including in rural broadband, with Bell reducing its fixed wireless rollout in rural areas by 20 per cent.

Bell said in its petition that the CRTC order has “now reached the point that the rates are below our costs,” and Rogers Communications Inc., Cogeco Inc., Bragg Communications Inc., Shaw Communications Inc. and Quebecor Inc. that the new “indefensibly low” rates imposed by the CRTC means they won’t be able to recover the costs of their investments, “let alone earn a reasonable rate of return on the massive investments they have made and had intended to continue making in Canada’s wireline networks.”

Saturday’s statement indicated the government found merit to those arguments.

“Incentives for ongoing investment, particularly to foster enhanced connectivity for those who are unserved or underserved, are a critical objective of the overall policies governing telecommunications, including these wholesale rates,” it said.

The statement said the COVID-19 pandemic “has only reinforced the importance of connectivity. The investments our government is making in high-quality networks, particularly in rural and remote communities, are key to ensuring equitable digital access for all Canadians. Equitable access also means that it is available at fair prices that Canadians can afford.”

The government telling the CRTC it should reconsider a decision does not mean the regulator, which operates at arms’ length, must change that decision.

In 2017, after Bains told the CRTC to reconsider a decision not to mandate wholesale access by WiFi-based mobile virtual network operators (MVNOs), the regulator held firm on its initial ruling on the issue, opting instead to mandate the offering of low-cost data plans.