As he steps down, Bains says telecom affordability ‘won’t go away’ 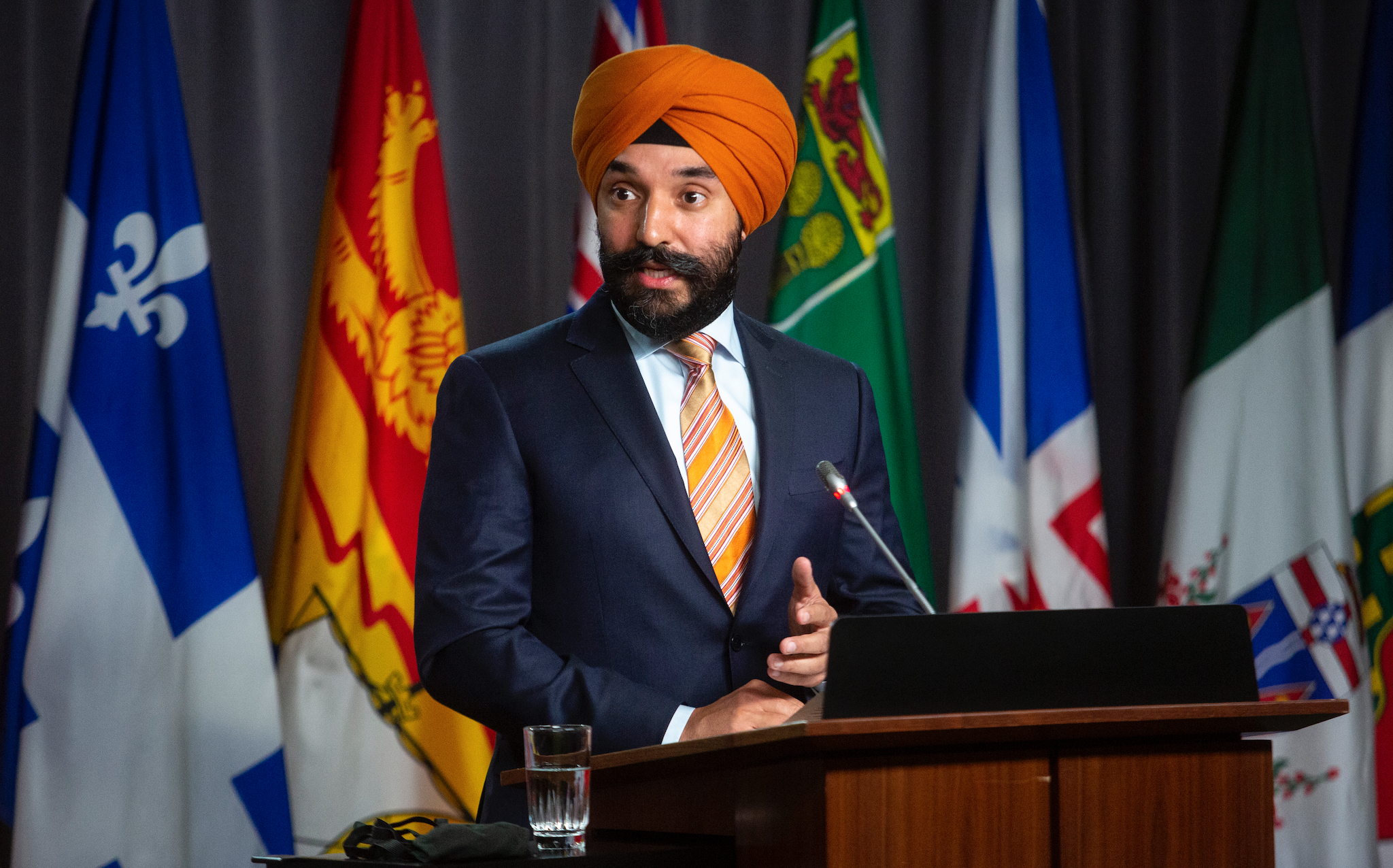 Minister of Innovation, Science and Industry Navdeep Bains holds a press conference in West Block to speak with reporters about the introduction of the proposed Digital Charter Implementation Act on Nov. 17, 2020./ Photo by Andrew Meade.

The affordability-focused initiatives Navdeep Bains put in place will continue to bring down prices of telecom services after he leaves the innovation minister role, he told The Wire Report in an interview.

Bains announced Tuesday morning that he would not run in the next federal election, shortly before Prime Minister Justin Trudeau named François-Philippe Champagne the new innovation minister. Champagne has served as foreign affairs minister since 2019. Prior to that, Champagne was minister of infrastructure and communities, as well as minister of international trade.

Asked what advice he has for his successor, Bains said: “be razor-focused on your key priorities. We’re in a minority government. And focus on initiatives you can implement in a timely manner.”

That means focusing on the affordability issue, and the government’s plan to see prices for some plans from incumbent flanker brands drop by 25 per cent, Bains said. He announced that plan last March, after the Liberals campaigned on lowering wireless prices by 25 per cent in the 2019 federal election.

Bains had been innovation minister since Trudeau’s Liberals were first elected in 2015.

Asked whether there was more he should have done on the issue of lowering prices — given that documents obtained by The Wire Report revealed that the government expected prices for those targeted plans to fall anyway without government action — Bains defended his record.

He said the government’s support of an industry initiative to make low-cost internet plans available to some low-income Canadians is an example of how it took a “very broad approach when it came to affordability.”

Overall, Bains expects those measures, alongside wider initiatives like auction set-asides for smaller players and the consumer-focused policy direction he issued in 2019, to continue driving down prices.

“The policy directive that I put out to the CRTC to talk about affordability and finding that balance with investment was an important achievement in the telecom sector,” he said. “It gives clear direction to the CRTC on how we need to move forward to drive down prices for Canadians and at the same time deal with the issues around the digital divide” when it comes to rural broadband.

“The policy directive in my opinion will be a long-lasting initiative that will set the framework going forward for competitive price points for consumers to choose from,” he said.

As he takes over the innovation portfolio, Champagne —- a lawyer who worked at Zurich-based tech and electronic manufacturing company ABB Group, and UK-based oil and energy company AMEC — will build his own relationship with the federally-regulated telecom industry. It’s one that, during Bains’ time, was at times acrimonious and at times friendly.

“We had healthy disagreements. Clearly, when you’re talking about affordability and you’re promoting competition, the incumbents will push back,” Bains said. “But we also had consensus and an understanding on the importance of investing in rural communities and remote communities and dealing with that digital divide.”

Asked whether the government should have acted to expand rural broadband earlier — given that nearly half of rural households still don’t have access to speeds that meet the CRTC’s basic service minimums — Bains said he is “proud of the investments we made.”

He said: “I think the steps that we took, the partnerships that we had, laid a strong foundation for us to move forward in a rapid manner to address this digital divide.”

As part of its efforts to improve rural broadband access, the Liberal government launched the $1.75-billion Universal Broadband Fund, plus an additional $750 million in funding for low-earth orbit satellites, in November 2020.

As he steps away from the ministry and moves to serving as an MP, Bains said he is going to “miss the opportunity to work very closely with Maryam Monsef on the deployment of the Universal Broadband Fund, as well as seeing the low-earth orbit satellites come to fruition.”

Bains also said he’d “love to see the timely passage of C-11,” the sweeping changes to Canada’s private-sector privacy laws he introduced in November, and reforms which he said “are critical going forward to enable 5G technology and to enable people to have more trust when they’re navigating data and digital economy.”

The CRTC announced it was initiating a proceeding to improve telecommunications services in Canada’s north.  The area covered includes the three territories, northern British Columbia and...

Canada and Quebec invest $200K each in broadband rollout

The governments of Canada and of Quebec are each investing $199,305 in broadband rollout in three Quebec communities. BCE Inc. will add an additional $132,000. The governments are investing...

Players in the low-earth orbit satellite (LEOs) space are casting doubt on  Space Exploration Technologies Corp. (SpaceX) ability to perform in the Canadian market three days after the government...