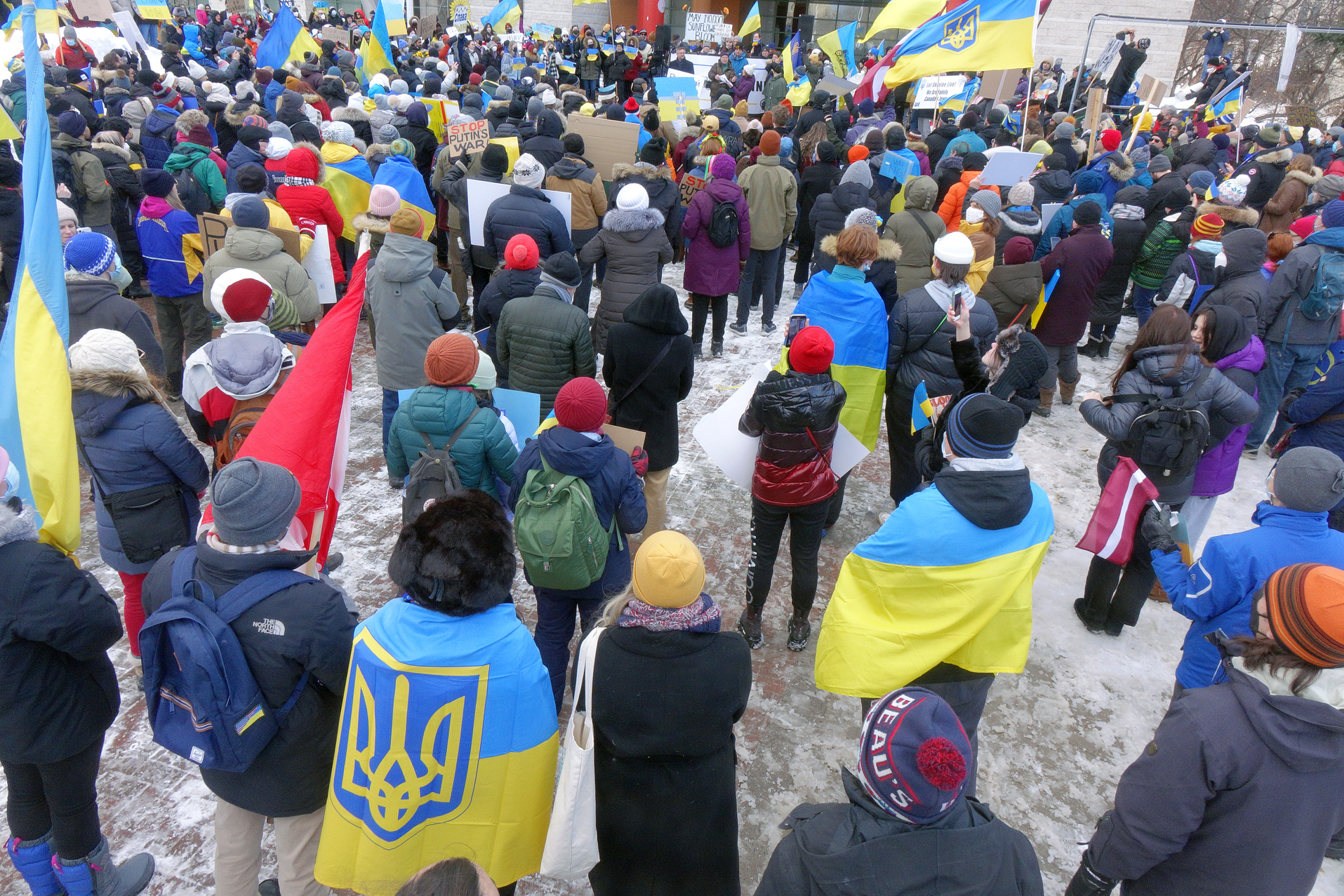 Ukrainian rally in front of the embassy of Russia and City Hall. February 27, 2022. Photo taken outside City Hall. The Hill Times photograph by Sam Garcia.

Prime Minister Justin Trudeau announced Monday afternoon that the Government is asking the CRTC to “begin the process” of reviewing the presence of the Russian-state funded Russia Today channel on Canadian broadcaster airwaves following last week’s invasion of Ukraine by Russian armed forces.

“The CRTC is an independent body and we will be asking them to begin the process to review Russia Today’s presence on Canadian airwaves. The rigorous process is important when it comes to the independence of media in our country, but even ahead of that decision, major providers are already removing RT proactively,” Trudeau said in a press conference.

“There is a significant amount of disinformation circulating from Russia, including on social media, and we need to keep calling it out.”

The announcement comes as a number of Canadian broadcasters, including Telus Corp., BCE Inc., Rogers Communications Inc., and Shaw Communications Inc. all announced that they would remove the channel from their television operations.

On Saturday, Heritage Minister Pablo Rodriguez tweeted that “I share the concerns of many Canadians about the presence of Russia Today in our broadcasting system.”

“We’re looking at all options,” he wrote in the tweet. The following day, Rogriguez tweeted messages of gratitude to Telus, Bell, Rogers, and Shaw for removing the channel.

Former CRTC vice-chair Peter Menzies wrote on Twitter that he was “concerned they are just making it up as they go along.”

It is “one thing to do this as part of a series of sanctions and another for politicians to (be) dictating content approval decisions to the CRTC/BDUs,” he wrote in a message to the Wire Report.

Spokespersons for Shaw and Bell declined to answer the question of whether or not Rodriguez had asked the companies to pull the channel. Neither Rogers nor Telus responded at press time.

Asked whether the Government was considering banning other state-owned media, Trudeau left the door open to further take-downs in the future. “Certainly there can be reflections of other countries that engage in misinformation, but right now with the Ukraine crisis, our focus is on them,” he said.

The House of Commons Monday passed a unanimous motion calling on the Government to issue an order of general application directing the CRTC to “remove state control broadcasters that spread misinformation and propaganda from the list of non Canadian programming services and stations authorised for distribution, effectively removing Russia Today from Canadian airwaves.”

At the House of Commons Heritage committee meeting Monday, Rodriguez told MPs that “RT is propaganda, RT is disinformation, RT is misinformation. So I totally support their decision,” referring to the decision of broadcasters to remove the channel, and added that he would make a further announcement Monday night.

The “CRTC has to remain at arm’s length. So I can assure you, although I can’t go any deeper into detail, that we will make sure that everything is respected, everything is in compliance,” Rodriguez told MPs ahead of the Monday evening announcement.

Meanwhile, the Mobile World Congress in Barcelona is canceling the Russian Pavilion and a handful of Russian firms are being barred from exhibiting at the event. The annual gathering takes place from Feb. 28 to Mar. 3. John Hoffman, CEO of event organizer GSMA, estimated close to 60,000 people will attend the conference.

“We are guided by the international sanctions and there are some companies that are identified on the sanction list and those will be barred from participating,” Hoffman told Reuters.

He labeled the number of sanctioned companies and executives as “a handful, a few” but could not be specific as the sanction list is still evolving.

Canadian exhibitors include Telus, the Canadian embassy in Spain, Investissement Québec and the Ontario ministry of economic development.

– Reporting by Michael Lee-Murphy, Jenna Cocullo, and Paul Park, and editing by Paul Park at ppark@thewirereport.ca

CIK Telecom Inc. has settled a dispute with a landlord in Richmond, BC over access to a group of buildings. The CRTC sent a letter on Monday to the interested parties, pointing out the matter had been...