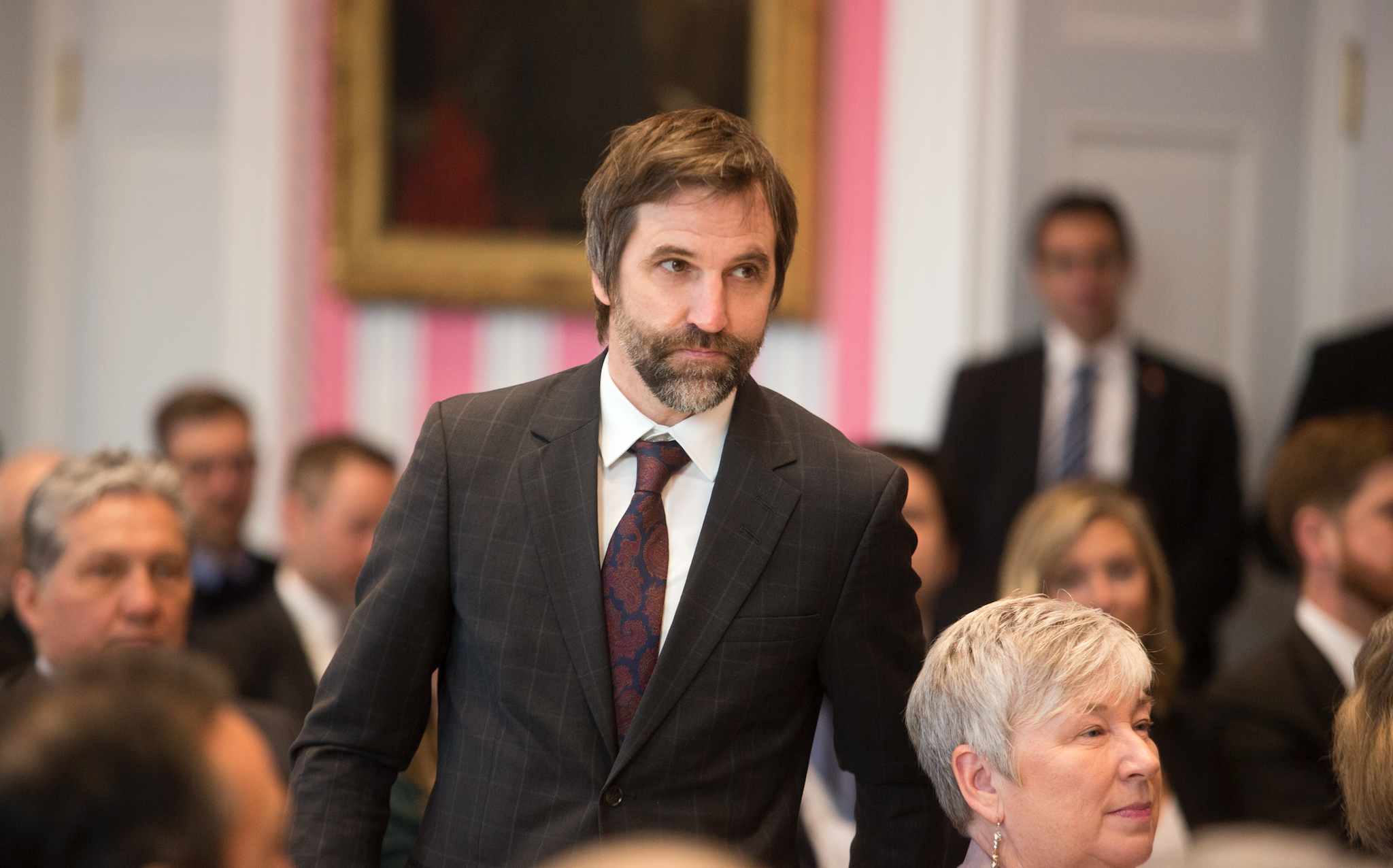 Steven Guilbeault is sworn in as heritage minister at Rideau Hall on Nov. 20, 2020./ Photo by Andrew Meade.

The Liberal government’s minority mandate means it will have to move fast on its promised new rules for Canadian content on foreign digital platforms, Heritage Minister Steven Guilbeault says.

“We’re in a minority government and we have to do in months what we probably would have done in years in another context,” he said in a phone interview with The Wire Report.

Parliament will return from winter break on Jan. 27, and the Liberals have promised three main new measures that would affect foreign online companies, including new rules for Canadian content on streaming services.

Guilbeault’s mandate letter directs him to introduce, by 2020, legislation that would force content providers “including internet giants,” to include in their catalogues “meaningful levels of Canadian content,” contribute to CanCon creation, promote that content and ensure it’s “easily accessible.” It’s a promise that predates the fall election campaign and that was part of the party’s election platform.

“If we want this to be in place by the end of 2020, it needs to happen really really soon, just by  nature of our Parliamentary system and the time it takes,” Guilbeault said, noting that’s especially the case in a minority situation.

He added: “The clock is ticking.”

But Guilbeault isn’t worried that a minority will cause a barrier to passing the new legislation.

“With many opposition parties, maybe not all, but certainly with many of them, I’m very confident we will find common agreement to move this forward,” he said. During the election, there was general consensus among all the parties on implementing some form of new taxation on many of the world’s largest digital companies.

Despite the running clock, Guilbeault said the government is waiting for the recommendations of the broadcasting and telecom legislative review panel led by Janet Yale — due at the end of this month — before determining the specifics of how to move forward.

“We don’t want to go out there before we have the Yale report. This group has been working on this for quite some time, they have extensive consultation, so we certainly don’t want to jump the gun on all this hard work that has been done,” he outlined.

That includes decisions on the timeline for the changes and vehicle by which they will be implemented, as well as details about what those new contributions will look like, such as whether they will differ from the obligations currently imposed on traditional TV providers. When asked whether the promises the government has already made on Canadian content will be incorporated into the upcoming changes to the Broadcasting Act, Guilbeault said it’s too early to specify.

“I think there are different possibilities,” he said. “Maybe there are things we will try to move on more quickly.”

The Liberals have been criticised by some for deciding on how to handle the issue of new rules and taxes for digital companies before the expert panel had issued its recommendations. Asked to respond to those critics, Guilbeault said the government has kept a “very open mind” when it comes to the report, and while it has promised some measures, it has committed to very few specifics.

And what if that report completely contradicts the directions issued in the mandate letters?

“It’s always possible,” Guilbeault acknowledged. “You ask a group of independent people, experts in their fields, to look at something, they may come up with advice that is different or completely different than where your thinking is heading. We’ll have some tough decisions to make if that happens.”

In addition to the new rules for CanCon, there are also two new tax measures the Liberals have promised to implement, which fall under the purview of Finance Minister Bill Morneau.

Both were also in the party’s election platform and in Morneau’s mandate letter, though there have been some changes to the specifics of how the government plans to execute those promises.

Morneau’s mandate letter directs him to “ensure that multinational tech giants pay appropriate corporate tax on the revenue that they generate within Canada,” and to “work with the Organisation for Economic Co-operation and Development to ensure that international digital corporations whose products are consumed in Canada collect and remit the same level of sales tax as Canadian digital corporations.” Those instructions are in line with the election promises.

Guilbeault said the government will now wait for OECD consultations on the corporate tax issue, while it is ready to move on the sales tax, following a report issued in June by the OECD containing guidance for tax authorities on digital platforms.

Guilbeault said that the government wants to move on the extension of the GST for foreign digital companies “quickly,” and noted that Prime Minister Justin Trudeau said recently that the measure could be included in the next federal budget.

“I don’t want to oversimplify, but it’s not complicated in the sense that the GST already exists, Canada is paying it, so it’s not rocket science,” he added.

He said that since he was named Heritage Minister in November, he’s met with more than 250 representatives of the cultural sector, and there is agreement among them that web giants should pay their fair share, starting with the GST. Indeed, the interim report from the BTLR panel said there was general agreement among stakeholders that sales taxes should be applied equally to Canadian and foreign companies.

“To us, we’re not trying to jump the gun on the Yale report,” he said, adding that he would be “really surprised if the Yale report came out and said ‘you shouldn’t ask these guys to pay GST.’ Really, I don’t see that happening.”

The OECD is continuing consultations on a unified tax regime for the world’s largest digital companies that would affect the likes of Facebook Inc., Apple Inc., Amazon Inc., Netflix Inc., and Alphabet Inc.’s Google.

While Morneau’s mandate letter doesn’t specify details about the new corporate tax, during the election the Liberals promised a three-per-cent tax on the advertising and data revenues of companies with at least $1 billion in global and $40 million in Canadian revenues a year.

A spokesperson for Morneau didn’t respond to questions about when the government plans to introduce either of the two tax measures.

When it comes to the new CanCon rules, who will be responsible for enforcing them also remains to be seen, Guilbeault outlined in the interview, noting that different countries have taken different approaches. Some have given that responsibility to a traditional, CRTC-like regulator, while others have created new bodies to deal with digital and online regulation specifically. The CRTC currently refrains from regulating digital platforms, which operate under an exemption order.

“So we’re certainly looking and studying these models and trying to see what would be best for the Canadian context,” he said.

While the government is holding off until the expert panel’s report is released, “we’re not just sitting around doing nothing,” Guilbeault added.

“We are looking at what are the options out there and trying to start thinking how some of these models look like in a Canadian context.”

And while he is promising to move fast on some of the new measures, Guilbeault also indicated that additional public consultations — which there have been multiple rounds of since the Liberal government was first elected in 2015 and which eventually led to the appointment of the expert panel — will be part of the process of updating the various pieces of communications legislation.

“Reforming the CRTC is not something that can be done overnight,” he said.

While Guilbeault declined to specify any timelines, a Canadian Heritage document from January 2019 obtained by The Wire Report through access to information indicated that the government planned to introduce draft legislation by November 2020, which would be tabled in April 2021 and become law in October 2022.

The entirety of what those changes will include remains to be determined, but the scope of the panel’s report and the upcoming changes will go beyond just new rules for digital platforms.

“Clearly, there is a broad understanding that this model that has served Canadian cultural content for decades doesn’t work anymore. So are we going to just change it for web giants? Are we going to change it for everyone who’s part of the ecosystem?” Guilbeault asked. “These are all questions that we are asking ourselves now, to which I don’t have the answers yet.”