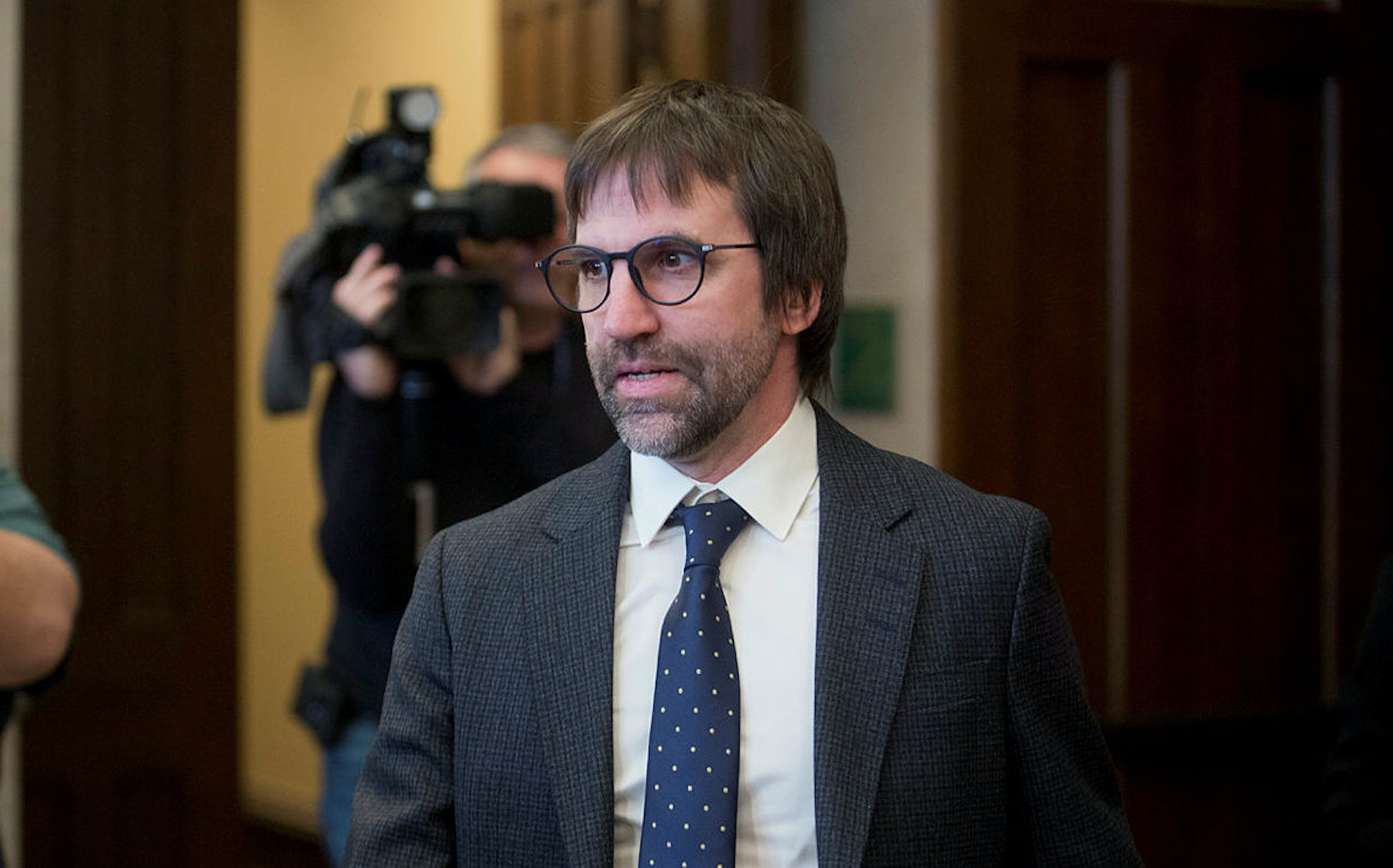 Minister of Canadian Heritage Steven Guilbeault speaks with reporters regarding clarifications on the BTLR report recommendations in the House of Commons foyer in Ottawa on Feb. 3, 2020./ Photo by Andrew Meade.

Guilbeault had originally intended to table legislation modernizing the Broadcasting Act in June but said during a Q&A with The Wire Report editor Anja Karadeglija that that would no longer be possible due to the COVID-19 pandemic, which has largely ground Parliament to a halt.

The new legislation would focus on ensuring all content providers, including web giants, support the creation and discovery of Canadian content — a 2019 election promise –as well as modernizing some aspects of the CRTC, Guilbeault said.

That legislation would not implement all the recommendations of the Broadcasting and Telecommunications Legislative Review report chaired by Janet Yale because there were too many recommendations to “try to tackle them all in one bill,” Guilbeault said.

“In terms of food for thought there was a lot there for me as a minister and us as a government, but we won’t try and address in that bill everything that was under the Yale report,” Guilbeault said. “We’re really trying to look specifically in that first bill at the issue of content providers and Canadian cultural content on the one hand.”

Asked how closely that regime would follow the BTLR’s recommended model of the CRTC overseeing three categories of online companies — curators, aggregators and sharing services — Guilbeault said the government wanted to give the regulator “the proper tools to be able to act,” but said he wanted the legislation to be “nimble”.

“Will we follow to the letter what was in the Yale report, no, but I think conceptually what was in the Yale report is very interesting. My take is our legislation, our regulations should be nimble, we shouldn’t have something that is extremely strict and difficult to change because technology evolves very quickly and as policy makers we don’t get to revisit these elements very often,” Gulbeault said.

“So in terms of the categories for example… of course we need to find the right tools for the right players, but what we would be asking a Netflix is probably different to what we would be asking a Disney for example, because their business model is very different, I mean obviously they produce content that we watch but beyond that there is some fundamental difference and I think our regulations need to be able to adapt to these different models.”

“We want everybody to contribute in one way or another to the production and discoverability of Canadian content, and that’s true of music as well.”

Legislation focused on requiring companies like Alphabet Inc. and Facebook Inc. to compensate news organizations when they use their content would follow a similar approach to laws adopted by France and Australia, Guilbeault told the conference.

Guilbeault said in the long-term that the Canadian government should not be funding media, telling the conference that the government would come up with something looking at neighbouring rights in the fall, stressing that “those who benefit from the media content of our news and information agencies in Canada should be paying their fair share.”

Pressed for more details on the government’s approach to neighbouring rights, Guilbeault said the government would come to an agreement with the web giants as to what an adequate framework for compensation would be, which would differ depending upon which news organization the content belonged to.

“I think this is a much more sustainable model … than hoping that the Canadian government can continue supporting news organizations in Canada,” Guilbeault said.

Asked whether the web giants would pay when they linked to content, or when it was displayed in search results, Guilbeault said the government had started engaging with news organizations to define a framework but work needed to be done over the summer to determine the best approach.

“We’ve already started talking with news organizations in Canada about what this could look like, what is it they have in mind, how far do we think we can with regulatory powers without overextending those,” Guilbeault said.

Guilbeault sparked controversy in February when he said he would seek to apply licensing requirements to content distributors —  as recommended by the BTLR panel — before clarifying two days later that the government had no intention of regulating the news media.

Asked during the conference about what steps would be taken to reform the CRTC, Guilbeault said he could not disclose them, but stated the government had an opportunity to “modernize” some aspects of the overall regulatory framework.

“So not necessarily less regulations, but better regulations, in terms of compliance for example, the compliance regime could be described as heavy, it’s largely still paper based,” he said.

“I think today we have the digital tools that could be used which would mean a much more facilitative process for people who are subject to the regulations so we are looking at a number of elements like that.”