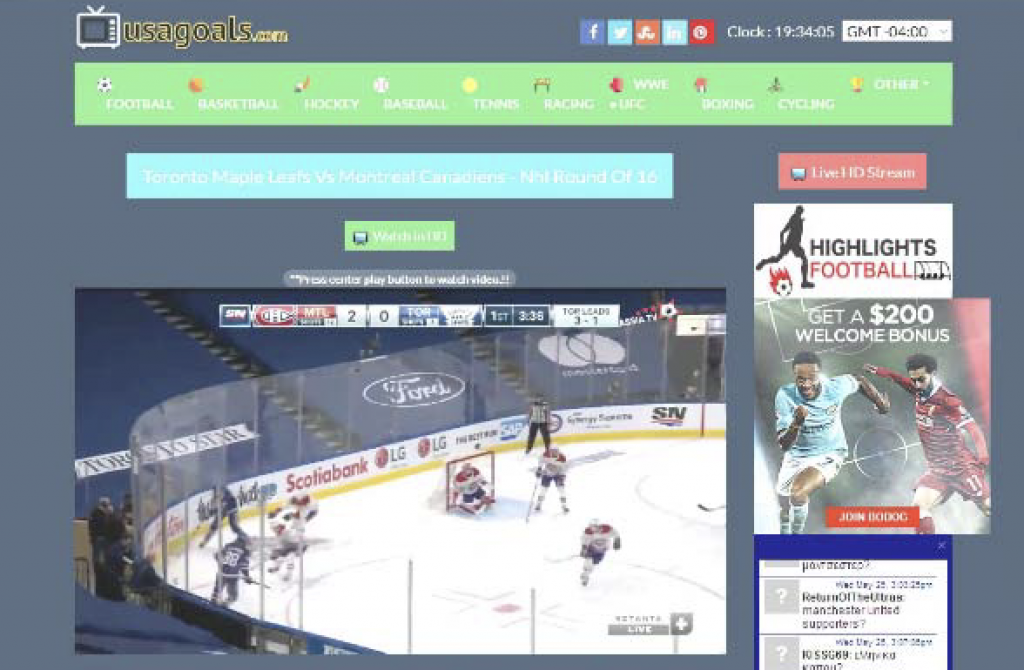 Nearly six weeks after a Federal Court of Appeal upheld Canada’s first-ever site-blocking order against an anonymous so-called pirate IPTV service, the same trio of rights holders is now asking for a new, broader blocking order from the Federal Court.

In a fresh notice of motion filed Wednesday, BCE Inc, Rogers Communications Inc., and Quebecor Inc. are requesting a new type of blocking order, which would require a number of third-party internet service providers — TekSavvy Solutions Inc., Distributel Communications Ltd., Cogeco Inc., and Bragg Communications Inc.‘s Eastlink — to block a rolling list of IP addresses in real-time, as they are identified by the broadcasters as broadcasting pirated National Hockey League games while those games are being broadcast throughout the NHL season.

Such a “dynamic” block, Bell, Rogers, and Quebecor argue, is “the only effective remedy to stop such blatant and widespread infringement of their rights in Canada and the irreparable harm that is caused” by pirate NHL streaming.

Last month, Bell, Rogers, and Quebecor sought an injunction against the unknown users of a set of IP addresses the companies say are being used to stream pirate NHL games via the sites livetotal.tv, usagoals.video, and an “unauthorized subscription service” called ComstarTV.

If granted, the order would mark a significant expansion of site-blocking used in Canada. According to a draft of the order sought by Bell, Rogers, and Quebecor contained in the court filing, the third-party ISPs would be required to “block or attempt to block access, by at least their residential wireline Internet service customers, to each of the IP addresses for the Target Servers” identified by the three broadcasters.

The term “target servers” is defined in a confidential and redacted portion of the notice of motion, and if granted it would run throughout the 2021-2022 NHL season.

In written representations for the requested order, the plaintiffs argued that in 2018, broadcast distribution undertakings lost between 583,000 and 974,000 subscribers due to television piracy, and that a yearly decline in Canadian television subscribers — which the broadcasters attribute partly to television piracy — could lead to an annual decrease in revenues of between $122 million and $178 million.

In investigating television piracy of NHL games, Rogers employed an investigator called Friend MTS Limited (FMTS) to track down sites pirating NHL games on four different Rogers Sportsnet channels in January of this year. According to the court filing, FMTS identified over 53,000 instances of pirate streaming, from just under 4,000 distinct servers for a period of six months during the hockey season.

In their court filing, the broadcasters acknowledged that they are asking for the first dynamic blocking order in Canada, but said that legally, the situation is no different from the static blocking order sought — and received — in the GoldTV case.

“The dynamic site blocking order simply provides a different mechanism to update the list of IP addresses to be blocked, which is necessary because of the transient nature of the infringing activities to be stopped (i.e., the content itself is live) and because of the increasing sophistication of pirates involved in the unauthorized broadcast of popular live sports events,” the companies wrote.

A simple injunction, the companies add — like the one originally sought against the anonymous streamers in June — “is simply not a feasible option in the present case,” given the amount and anonymity of the services involved.

The companies point to the decision in the GoldTV appeal, in which the Judge wrote that in an action against anonymous streamers, “it would seem pointless and unfair to require that the plaintiff jump through certain hoops and wait a certain time to confirm what it already knows, and the court already accepts, before seeking an injunction against a third party.”

According to TekSavvy’s vice president of regulatory affairs Andy Kaplan-Myrth, the request for Canada’s first dynamic site-blocking order is “concerning.”

If granted, he said in a phone interview with The Wire Report, “Canada will have the broadest site-blocking regime, anywhere in the world, without any legislative framework.”

“The companies will have created it out of whole cloth.”

Last month, when asked if the intent of the June 16 request for an injunction was ultimately for a site-blocking order, lawyers representing the three companies declined to answer, but wrote in a statement emailed to The Wire Report that “Hockey broadcast piracy is a growing and ongoing issue that requires attention as illegal pirated content causes Canadian content creators and distributors incalculable damages annually.”

BCE Inc., Rogers Communications Inc., and Quebecor Inc.  have turned to the Federal Court of Appeal to try and get a greater payout in damages from a seller of preloaded set-top boxes. In an Oct....

A trio of Canada's biggest broadcasters has asked the Federal Court for a renewal of Canada's first ever site-blocking order, two years after the original blocking order was first granted in a...