The Wire Report’s guide to the 2021 federal election 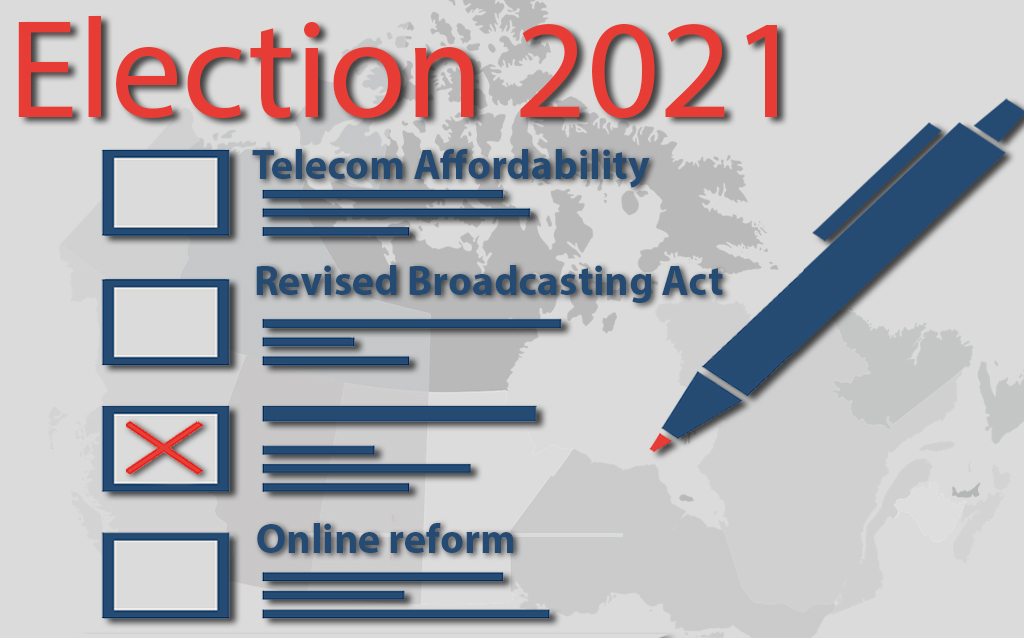 After Prime Minister Justin Trudeau formally called Sunday for a widely-expected election to take place on Sept. 20, the political machinery across Canada’s parties has whirred into action, making promises and plans in the hopes of attracting voters. Here’s your early guide from The Wire Report into what issues across the telecommunications and broadcast sectors might pop up during the five-week 2021 campaign.

A number of events in the telecom sector — on both the business and regulatory side — have the potential to turn competition and affordability into an election issue. The long-rumoured announcement of plans by Rogers Communications Inc. to acquire Shaw Communications Inc. turned the focus of many politicians and policy-makers toward the state of competition in the wireless market. A three-pronged approval process across the CRTC, the Competition Bureau, and the Department of Innovation, Science and Economic Development (ISED) will carry into next year.

On Friday, the municipal advocacy group Ontario Big City Mayors passed a resolution asking the federal government to review the CRTC’s May decision to revert wholesale internet access rates back to 2016 levels. One of those wholesale-based internet service providers (ISPs) fighting the CRTC’s decision, TekSavvy Solutions Inc., praised the move.

“It is clear that the federal Cabinet can address this fiasco”, TekSavvy’s vice president of regulatory and carrier affairs Andy Kaplan-Myrth said in a Friday release. “With the stroke of a pen, Cabinet can deliver lower internet prices for Canadians, simply by reinstating the CRTC’s pro-consumer 2019 Rates Order, which was based on years of process and mountains of evidence.”

“People are being gouged, every month, because instead of standing up for consumers, the Liberal and Conservative governments have left it to industry to set the prices,” the NDP’s “Ready for Better” election policy document reads, and goes on to suggest a price cap for cell phone costs “to make sure that Canadians aren’t paying more than the global average for their cell phone and internet bills.”

The NDP also proposes a “Telecom Consumers’ Bill of Rights,” alongside a promise to declare high-speed broadband an essential service.

The Conservatives propose to address the issue of pricing affordability by opening the Canadian wireless market to foreign competition, “provided that the same treatment is reciprocated for Canadian companies in that company’s country,” according to their “Canada’s Recovery Plan” platform launched Monday.

“A few giant companies have too much power, and Canadians are suffering for it,” the document reads.

One of the keystones of Liberal governance on the issue of rural broadband connectivity has been its rollout of the Universal Broadband Fund. Initially launched (after significant delays) in November 2020 as a $1.75 billion program, it saw an additional $1 billion top-up in the April federal budget and has also seen a steady stream of funding announcements all year long. The government has also been plowing money into the Telesat Corporation‘s low-earth orbit satellite (LEOs) program, known as Lightspeed.

Federal spending has been criticized by stakeholders small and large, however, as being piecemeal and unfocused. Look for this to become a key issue as parties scramble for rural votes and the COVID-19 pandemic has put a spotlight on the importance of fast, stable internet.

The biggest piece of broadcasting and internet regulation to come out of the last parliamentary session was Bill C-10, a revision of the Broadcasting Act.

The bill died in the Senate at committee review when the election was called. A majority victory for the Liberals would mean a smoother journey for the bill, but the government would be required to reintroduce Bill C-10 as if it “had never existed,” according to parliamentary procedure.

It remains unclear if the party plans to make modifications. According to the Liberal Party’s platform, it plans to “move forward” in its first year “with legislation that will take appropriate measures to ensure that all content providers –- including internet giants –- offer meaningful levels of Canadian content in their catalogues, contribute to the creation of Canadian content in both official languages, and promote this content and make it easily accessible on their platforms.”

While the party’s platform does not explicitly mention the Broadcasting Act or its revisions, Bill C-10 has regulations in it that stipulate that social media platforms, when acting like broadcasters, must promote Canadian content and financially contribute to the cultural sector based on its Canadian revenues.

The Conservative Party, for its part, said it plans to repeal the bill “which gives too much power to regulators while failing to provide businesses with the clear guidelines they need to operate.”

The party promised to require services such as Netflix Inc., Walt Disney Studios’ Disney+, and Amazon Prime Video to “reinvest a significant portion” of their Canadian gross revenue into producing original Canadian programming, with requirements for French content.

“If they fail to do so on their own in a given year, they will be required to pay the difference into the Canadian Media Fund,” according to the platform.

The NDP, which supported Bill C-10 along with the Liberals, Bloc Québécois, and Green Party, said it plans to modernize the Broadcasting Act “fairly” without being specific about what aspects of the bill it would like changed. In the party platform, it also noted that it will prioritize partnerships with Canadian independent producers, increase funding for Telefilm, and enhance financial support for the Canada Media Fund.

In a Monday interview with FRIENDS of Canadian Broadcasting, NDP leader Jagmeet Singh said although there was majority consensus for C-10 in the House of Commons, “at the heart of it,” the bill was “mismanaged” by the Liberal government and criticized them for allowing  Netflix to pay less than what other broadcasters must pay.

“I can say with all confidence as leader of the party, we are not at all susceptible (to lobbyists and big tech). We’ve called for taxing Netflix, taxing web giants, and taxing Amazon, which operates in Canada with record profits here and pays no taxes,” he said.

The NDP also promised to increase funding for CBC/Radio Canada, saying “decades of budget cuts” by both leading parties have caused damage to the public broadcasting sector.

Singh further elaborated on the party’s plans with Friends of Canadian Broadcasting, saying he wanted to see a quality of public broadcasting on a level with the BBC, in the United Kingdom.

Currently, the CBC budget is $34 per Canadian per year, according to Friends of Canadian Broadcasting.

“I want us to get to a point where we are not no longer amongst the lowest funded in the world, we need to be competitive with what other jurisdictions are doing around the world. We want to have a properly funded… public broadcasting so I’m open to what proper funding would look like,” Singh told interviewer Francine Pelletier when asked if he would up the CBC funding to $50 per year.

Singh added that sponsored content on the CBC “blurs the line” of public broadcasting and said he would like the CBC to “get to the point” where it does not rely on sponsored content as a source of revenue, going a step further to say it should be ad-free altogether.

Reforms to the CBC were absent from the latest rounds of broadcast legislation updates, yet this time around the Liberal government plans to “strengthen the regional mandate” of Canada’s public broadcaster to increase its local news content. It also plans to mandate that both the CBC and Radio-Canada “open up its digital platform, so that journalism start-ups and community newspapers can access affordable technology to develop and distribute local content.”

Conservative party leader Erin O’Toole, during his run for party leader, said he would defund the CBC’s English online and television services, sparing radio and its French-language content.

However, the party’s platform document released Monday appears to have taken a step back from his original promise and with plans to “review the mandate of CBC English television, CBC News Network and CBC English online” to develop a public interest model “like that of PBS in the U.S., ensuring that it no longer competes with private Canadian broadcasters and digital providers.”

In regard to Radio-Canada, the party said it would no longer charge user fees for its online streaming services or be allowed to operate branding services in order to minimize competition with the private sector.

Before the election was called, the federal government launched a consultation on news compensation, highlighting two different approaches to putting more money from big tech into the local news economy. Aside from the issues of funding the CBC, none of the parties addressed how they would strengthen Canadian news media.