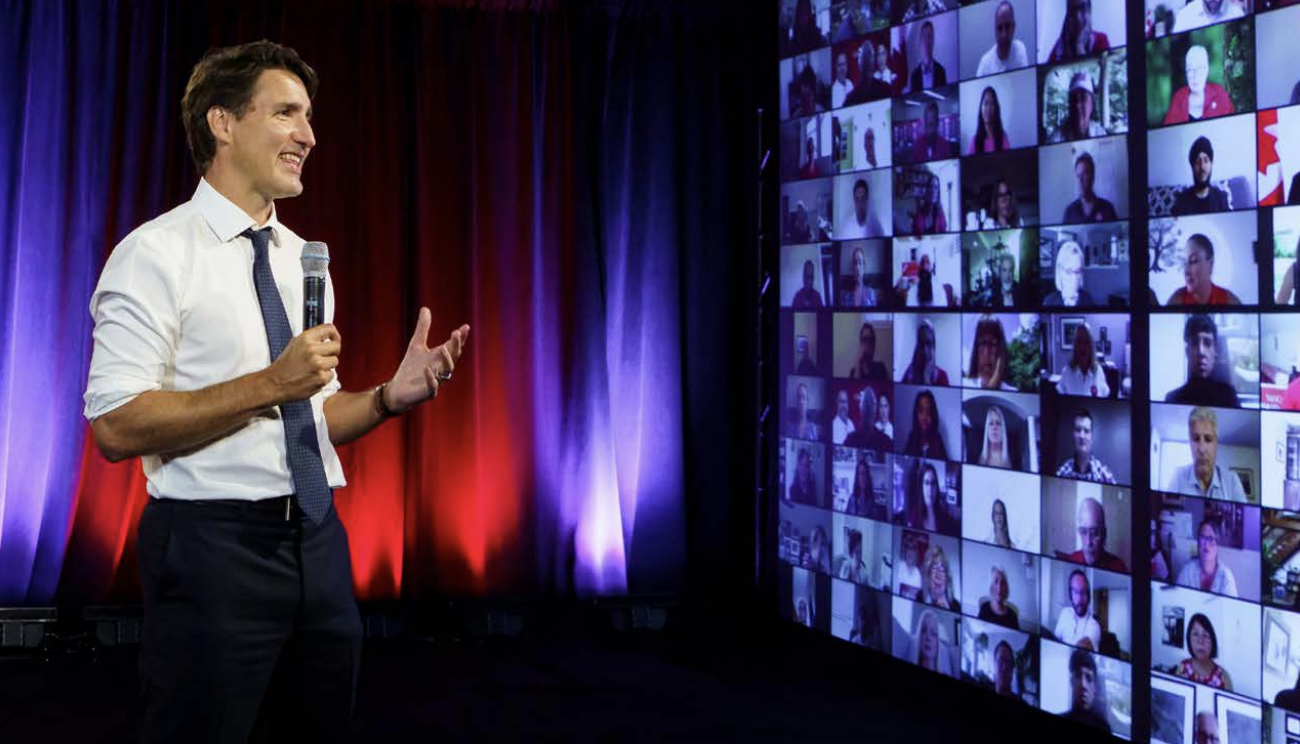 Liberal leader Justin Trudeau as seen in the party's platform materials for the 2021 federal election.

If re-elected come Sept. 20, Justin Trudeau’s Liberal party says it would employ a “use it or lose it” approach requiring national carriers that have purchased the rights to build broadband to accelerate work on wireless and high-speed internet connectivity in rural and northern Canada.

Rural connectivity has been subject to analysis and funding for years, with money coming from initiatives such as the $2.75 billion Universal Broadband Fund. Within the Liberal’s platform released Wednesday, the party says it wants to progressively meet unspecified broadband access milestones between now and 2025. If these milestones aren’t met, it will mandate the resale of spectrum rights and reallocate that capacity to smaller, regional providers.

While the Liberal government has set a goal of 2025, the Universal Broadband Fund itself has a target of making it so all Canadian households are able to connect to the internet at a speed of 50/10 Mbps by 2030, with 98 per cent of people connected by 2026.

As with funding, the cost of home internet has been up for discussion in recent weeks. The NDP and the Conservatives have brought up their own plans for internet affordability, and TekSavvy Solutions Inc. encouraged people in a release Wednesday to visit a website called “Pay Less to Connect” to use an online tool to “demand concrete federal action that will lower monthly internet bills” ahead of the election.

“In this election, affordability remains top-of-mind for most voters,” the company’s release states.

Amongst a slew of other promises on actions it would take in the first 100 days of a Liberal government, the party says it would re-introduce legislation to reform the Broadcasting Act.

Its original plan to update the act, through Bill C-10, died in the Senate at committee review when the election was called.

The Liberals originally had support from the NDP, Bloc Québécois, and Green Party on the bill, while the Conservatives opposed it and have said the party would stop the type of enforcement proposed by C-10 as it gave “too much power to regulators while failing to provide businesses with the clear guidelines they need to operate.”

Following the launch of a consultation on news compensation prior to the election call, a Liberal government would continue working on introducing legislation that would require digital platforms such as Facebook, Inc. that make money from the publication of news content to share revenue fairly, according to its platform.

The platform states that legislation would be based on the Australian model, which Heritage Minister Steven Guilbeault had commended. Australian lawmakers moved to require Facebook to pay publishers for their news content. After Facebook decided to block news-related content from being shared in response, Guilbeault called the company’s move “highly irresponsible” and said he would press forward with introducing similar legislation in Canada.

A permanent increase of $50 million in funding for Telefilm Canada is on the table with the Liberals, as is an increase in the proportion of funding for French audiovisual content with Telefilm and the Canada Media Fund from 33 per cent to 40 per cent. The party said it would increase the government’s annual contribution to the Canada Music Fund to $50 million by 2024-2025, and would double its contribution to the Canada Media Fund over three years. In addition, the Indigenous Screen Office could see permanent funding of $13 million per year.

The party said it would “modernize” Telefilm, the National Film Board, and the Canada Media Fund as well as the funding tools supporting the audiovisual sector, including video games, “in order to make funding platform-agnostic and open to more traditionally underrepresented storytellers, while favouring Canadian productions over foreign ones and ensuring that Canadians are better equipped to own and benefit from the content that they produce.”

Other funding promises include $400 million over four years to “build on the growing demand for virtual care that arose during the pandemic,” covering digital infrastructure and other system improvements.

The party also expects it would update CBC/Radio-Canada’s mandate and “reaffirm” its role as a public broadcaster in protecting and promoting the French language and Francophone cultures in Quebec and across the country. It also wants to see an  increase in the production of national, regional, and local news while ensuring Indigenous voices and cultures are “present on our screens and radios.”

CBC/Radio-Canada could also see $400 million over four years so it can avoid reliance on private advertising “with a goal of eliminating advertising during news and other public affairs shows.”