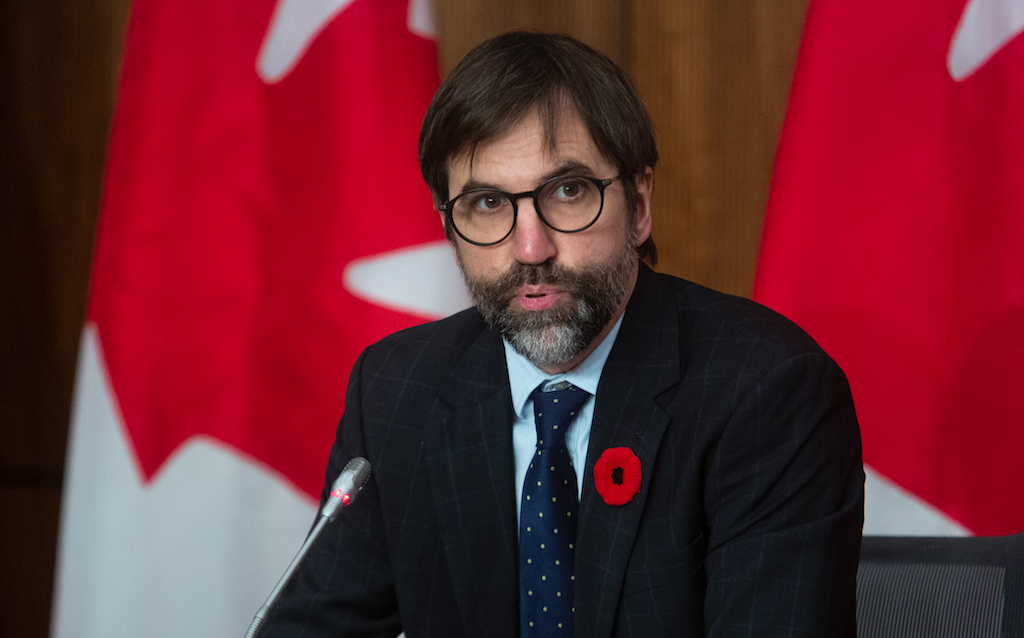 Minster of Canadian Heritage Steven Guilbeault holds a press conference at the Sir John A. MacDonald building to speak with reporters about plans to update the Broadcasting Act on Nov. 3, 2020./ Photo by Andrew Meade.

The Liberal government’s long-awaited update to the Broadcasting Act confirms that the CRTC is able to regulate online services such as streaming platforms and leaves it to the regulator to work out the details, under the guidance of an upcoming policy direction from the government.

Heritage Minister Steven Guilbeault told reporters Tuesday that once the bill passes, the CRTC will be under a tight timeline to complete its work.

“Once the bill is approved, we will be issuing a directive to the CRTC, an order-in-council, and we will be asking them to hold hearings and to do everything in a matter of roughly nine months,” he said.

“We haven’t reformed the Broadcasting Act since 1991, so it takes time to do it properly but we don’t want to take too much time because we know there is an emergency to act quickly. So we are trying to find this right balance of doing it right and doing it as fast as we can at the same time.”

The amendments don’t actually add the general authority to regulate online services to the CRTC’s arsenal, since the commission has long considered it has the power to do so, but has chosen not to. For the past 20 years, online services have been operating under an exemption order the CRTC issued in 1999, which exempted them from regulation.

Not included in C-10 are other new measures to regulate web giants and online services that the Liberals have promised to put in place, such as imposing sales taxes on foreign digital services and requiring platforms like Facebook Inc. to compensate news outlets for linking to their content.

Guilbeault said at the press conference that tax measures fall under the purview of the finance minister, and that the government is working on tabling a bill with those new rules for the likes of Facebook and Alphabet Inc.’s Google “very very soon.”

The bill tabled Tuesday does add new tools that the CRTC could use to impose similar rules on steaming services like Netflix Inc. that it currently has in place for the traditional broadcasting system.

The Broadcasting Act update specifies that the CRTC has the power to require online platforms to make financial contributions towards Canadian content.

The CRTC will also gain the ability to impose “conditions on the carrying on of broadcasting undertakings,” without licencing that undertaking. A presentation to media outlined that would include, for instance, conditions around the discoverability of content and conditions requiring platforms to report to the CRTC. The bill specifies that existing licencing powers, which the CRTC uses to regulate traditional broadcasters, would not apply to online services.

The bill also gives the CRTC the power to levy fines for non-compliance under the Broadcasting Act, and makes changes to the process by which the CRTC is given policy directions and how cabinet can set aside or refer decisions back to the CRTC. It extends the time period the government has to set aside or order the CRTC to reconsider a decision from 90 to 180 days.

The presentation indicated the upcoming policy direction would include telling the CRTC to assess which online broadcasters should be regulated — with video games exempt — and ensuring they are “required to contribute appropriately.”

The policy direction would also tell the CRTC to revisit “how it defines Canadian programs for the purposes of broadcasting regulatory obligations.”

Under the new update, the Broadcasting Act includes stronger language that would specify that the Canadian broadcasting system should “serve the needs and interests of all Canadians — including Canadians from racialized communities and Canadians of diverse ethnocultural backgrounds, socioeconomic statuses, abilities and disabilities, sexual orientations, gender identities and expressions, and ages — and reflect their circumstances and aspirations, including equal rights, the linguistic duality and multicultural and multiracial nature of Canadian society and the special place of Indigenous peoples within that society.” It also says the broadcasting system should provide opportunities for Indigenous individuals to carry on broadcasting undertakings and produce programming.

In contrast, the current act refers to “equal rights, the linguistic duality and multicultural and multiracial nature of Canadian society and the special place of aboriginal peoples within that society.”

The new bill also improves information-sharing between the CRTC and the Heritage ministry, Statistics Canada and the Competition Bureau, among other measures.

The Federal Court of Appeal dismissed Thursday the large telecom companies’ appeal of the CRTC’s Aug. 2019 decision lowering wholesale rates. The appeal is part of a long-running dispute...