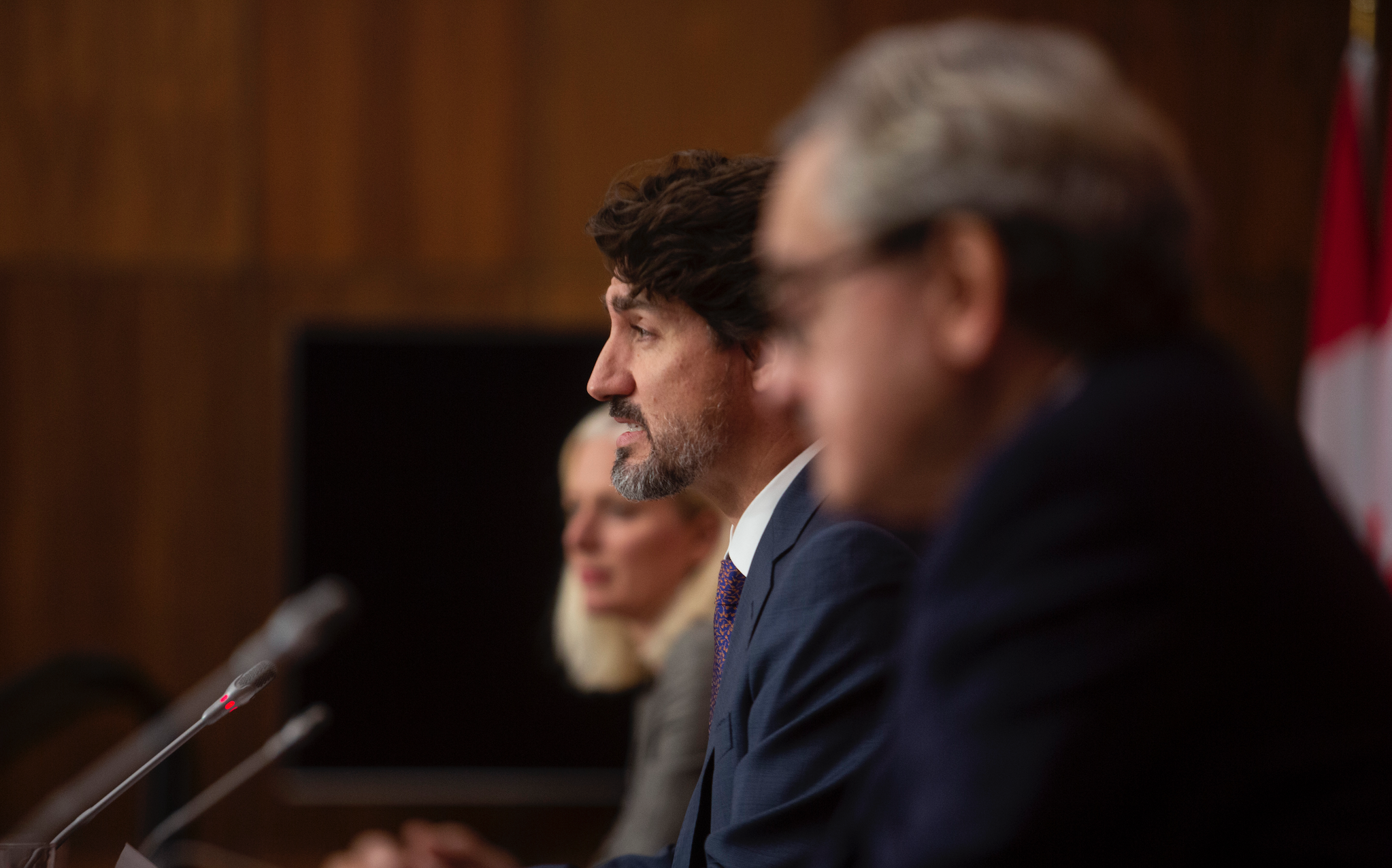 Prime Minister Justin Trudeau, Infrastructure Minister Catherine McKenna and chair of the board of the Canada Infrastructure Bank Michael Sabia make an announcement about the infrastructure bank from Sir John A. Macdonald building in Ottawa on Oct. 1, 2020./ Photo by Andrew Meade.

The federal government was told telecom companies weren’t enthusiastic about participating in the Canada Infrastructure Bank’s rural broadband program a year before it doubled its $1-billion investment in the initiative.

Documents obtained by The Wire Report through Access to Information show that the Privy Council Office flagged the lack of interest by the private sector in a fall 2019 document.

The document said “the greater challenge may be take-up of the loans; private sector interest in [CIB] loans for broadband announced in Budget 2019 has thus far been limited.”

Earlier this month, Prime Minister Justin Trudeau announced the government would double the Canada Infrastructure Bank’s funding for broadband projects to $2 billion, to be used towards connecting 750,000 homes and small businesses. The bank — whose mandate is to invest in infrastructure projects that generate revenue, are in the public interest and attract private capital — is aiming to have the projects announced and investments made by the end of the year.

The PCO document, issued shortly following the 2019 federal election, said the Liberal Party’s election platform had indicated a Liberal government would double that funding. It noted the increase in funds wouldn’t require any “additional implementation measures,” beyond expanding the bank’s ongoing efforts.

An Infrastructure Bank spokesperson didn’t answer when asked whether the IBC took any steps to change how the program works to increase the “limited” interest from the private sector.

“There is great interest in the CIB’s role in the broadband sector and we intend to build on this momentum,” Félix Corriveau said in an email. He said the bank intends to provide low-cost, flexible financing to make projects in rural areas more commercially viable.

“The CIB will execute its broadband plan in two primary ways. First, it will partner with other federal and provincial programs designed to encourage greater broadband connectivity. Secondly, the CIB will continue its direct engagement with Internet Service Providers across the country on projects that will not rely on those additional government programs, but can still be viable with CIB participation and support,” Corriveau said.

The 2019 PCO note also suggested alternative ways to help speed up the process of improving rural broadband connectivity — something the government has been promising to do since early on in the COVID-19 pandemic. Rural Economic Development Minister Maryam Monsef first promised to accelerate the government’s response in late April in an interview with The Wire Report. She then told an industry conference in early June the $1.7 billion Universal Broadband Fund — which is separate from the Infrastructure Bank’s program and provides non-repayable funding —  would open for applications in the “coming days.” The UBF still has not launched.

It suggested upholding the CRTC’s August 2019 decision lowering wholesale rates. In August 2020, the government chose not to overturn that decision, but issued a statement expressing concern that the rates were too low and could harm investment in networks.

It concluded that although the “commitment continues on the Liberal Government’s current direction and funding committed in Budget 2019, it is a multi-year effort and further investments may be required to achieve universal broadband access by 2030, especially in rural and remote areas.”

Public Safety Canada is considering implementing a “more sustainable funding approach” for Canada’s emergency alert system, according to documents obtained through the access to information...

As Canadian emergency management authorities hold their regular test of the public emergency alerting system Wednesday, the federal government is exploring how to extend those alerts to online...