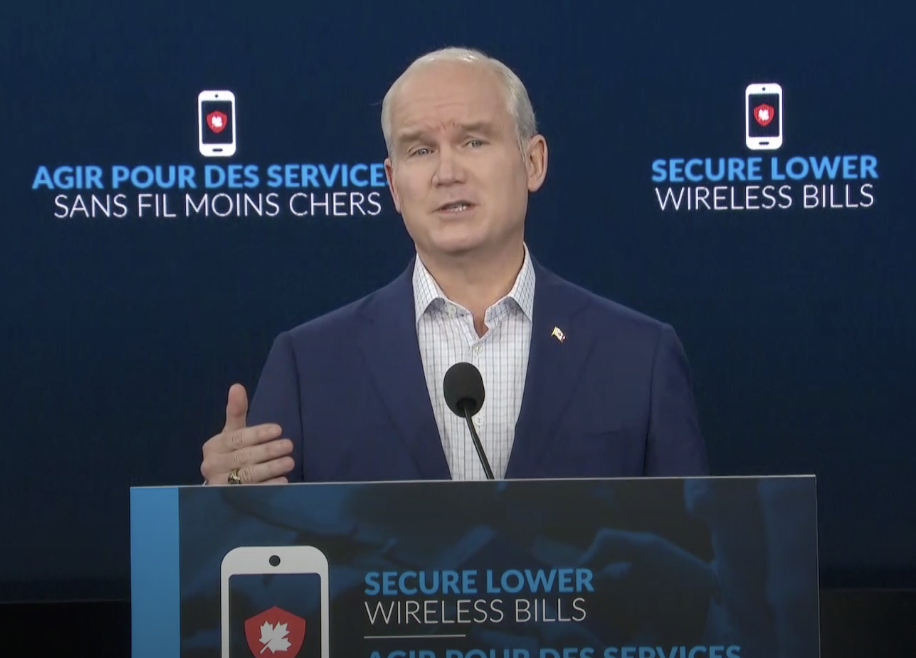 Conservative Party leader Erin O’Toole said during a press conference on cell phone and internet affordability Tuesday that his party would stand against mergers that could hurt consumer interests.

Though he did not specifically name the proposed acquisition of Shaw Communications Inc. by Rogers Communications Inc. in his remarks, O’Toole said a major driver of the pricing problem is a lack of competition. Shaw had been widely acknowledged as a driver of lower prices in its position as a fourth competitor to BCE Inc., Telus Corp., and Rogers. The merger additionally faces opposition from consumer groups.

“Let me also be very clear. Canada’s Conservatives will stand up to corporate Canada and reject mergers that substantially reduce competition and lead to layoffs and higher prices. And we will help lower prices by ensuring that local and regional players have access to the spectrum they need,” O’Toole said at a Tuesday press conference in Ottawa.

In a release Tuesday morning, the party explained its plan for lowering cell phone and internet bills as well as improving broadband access by building up digital infrastructure “to connect all of Canada to high-speed Internet by 2025, ensuring that all Canadians have reliable access to the Internet regardless of where they live.”

During the press conference, O’Toole said Liberal leader Justin Trudeau has been “slow” to bring high-speed internet to homes throughout the country. The federal government has been aiming to make it possible for all households in Canada to connect to high-speed internet service by 2030 — 98 per cent of which are expected to be able to connect by 2026.

The Conservatives said they would bolster competition by allowing international telecommunications companies to service customers in Canada — but only if Canadian companies would be allowed to do the same in the other companies’ home countries.

“We need more players in the Canadian market to help improve wireless choice and affordability for consumers,” O’Toole said.

The party said it would require investments in rural broadband and the lowering of prices for players looking to win spectrum in auctions and apply a similar “use it or lose it” approach for spectrum to the one pledged by the Liberal party in its platform last week. The Conservatives would also “empower” communities and local businesses by promoting investment in their own wireless and broadband projects, according to the release, lowering dependence on national carriers.

Following the Conservative party’s release of its plan Tuesday, the NDP sent out a release of its own criticizing the party for jumping on lower-cost plans now after voting with the Liberals in 2019 against measures to introduce a price cap on telecom services, abolish broadband internet data caps, crack down on aggressive sales practices, and review spectrum auction procedures.

“If Erin O’Toole was serious about lowering cell phone and internet bills, his party wouldn’t have teamed up with Justin Trudeau to vote against a price cap,” NDP leader Jagmeet Singh said in the release. “Just like Justin Trudeau, Erin O’Toole would protect the big telecom companies and make Canadians pay the price.”

In its own platform, the NDP said it would put in place a cap on cell phone and internet bills “until the industry becomes more competitive.” It would declare high speed internet to be an essential service and work on making it possible for all Canadians to connect to high-speed broadband in the next four years, including by creating a Crown corporation “to ensure the delivery of quality, affordable telecom service to every community.” That’s in addition to a Telecom Consumers’ Bill of Rights the party said it would introduce.